This post originally appeared on my old blog, Straight On Till Morning, on January 12, 2014. 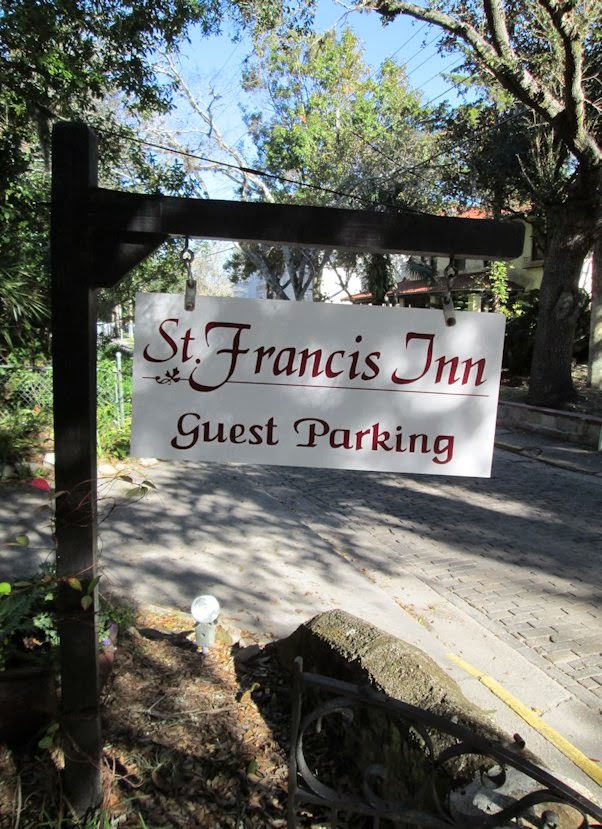 Ah yes, the Florida vacation posts continue! One thing that I was really looking forward to for this trip was actually leaving town to visit St. Augustine. Even though it’s only about two hours northeast of Orlando, I’d never been! (In my years of living in Orlando, I almost never made it out of town! Time off work was rare, and gas money was even more scarce!) I originally planned for four days of blissful beach relaxation, but sometimes life happens, so I only ended up being able to go for one night. I’ll write about playing tourist in a separate post, but I wanted to show you the snazzy Bed & Breakfast that I stayed at, first!

I was happy to find that the inn was easy to get to via the directions on their site. It’s about a five minute walk outside of the touristy part of town, but I appreciated the quiet of the more residential area. There’s plenty of parking just across the old brick street from the inn, and the parking lot was easy to spot. (see the sign at the top of the post!) 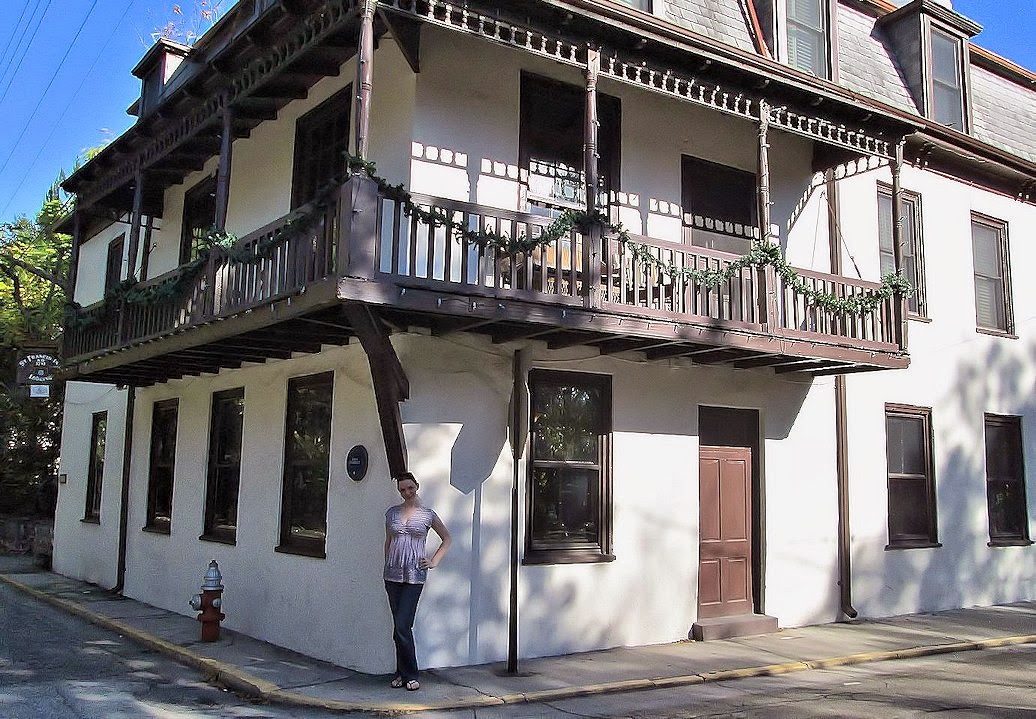 The street-facing sides of the building are quite plain, but the rest makes up for it! 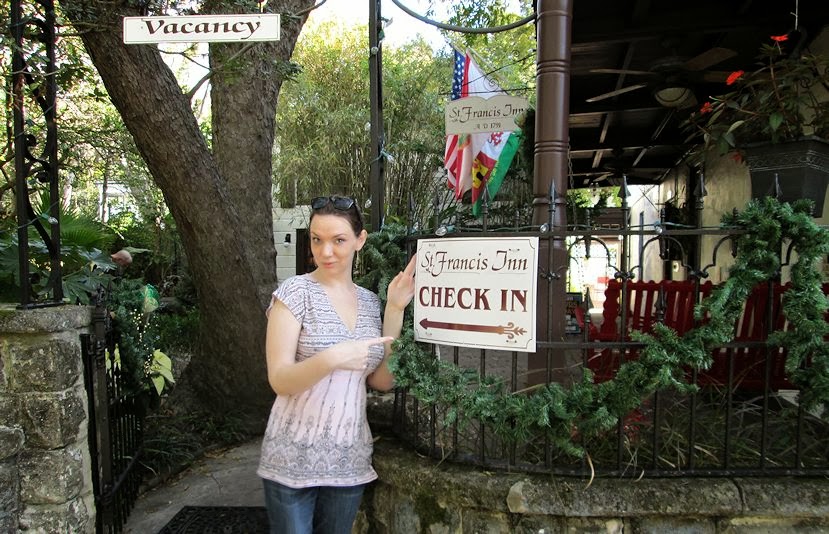 I think this was supposed to be an “Ooooh, check in!” face. It came out totally awkward.

When you pass through this little gate, you’ll find the lobby to the right, and a lush courtyard to the left. It’s a great place to bring snacks or drinks, or to just hang out with a book. (Or your laptop, since there’s free wifi!) 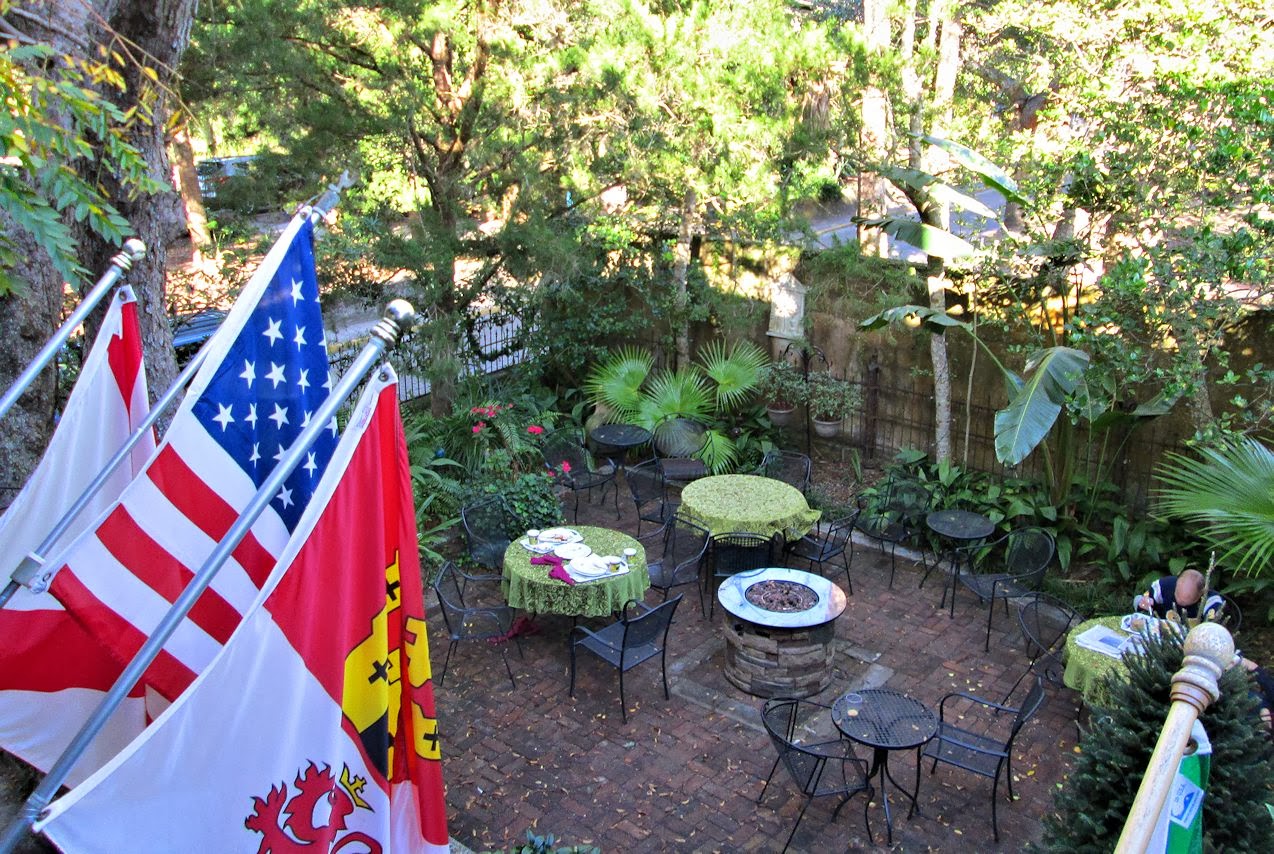 Looking down at part of the courtyard area.

My favorite part was a little spring-fed koi pond, which had a statue of the inn’s namesake. 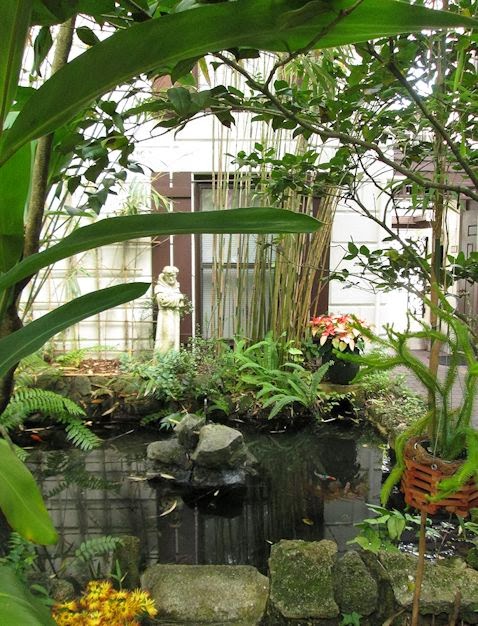 There are three separate guest areas (other than the rooms) in the main building – the lobby, which has the front desk and a selection of gifts, a dining room, and a small sitting room. Being the awesome blogger that I am, I totally neglected to get photos of any of them! Well, that’s not totally true – I snapped one photo of the selection of gift items, but it came out totally blurry (my awful new camera strikes again!). I borrowed these two pics from their website and Facebook to give you an idea:

Just mentally add a lot of Christmas decorations, since I was there in December! Oh wait! I did get a photo of the tree in the sitting room. Woohoo 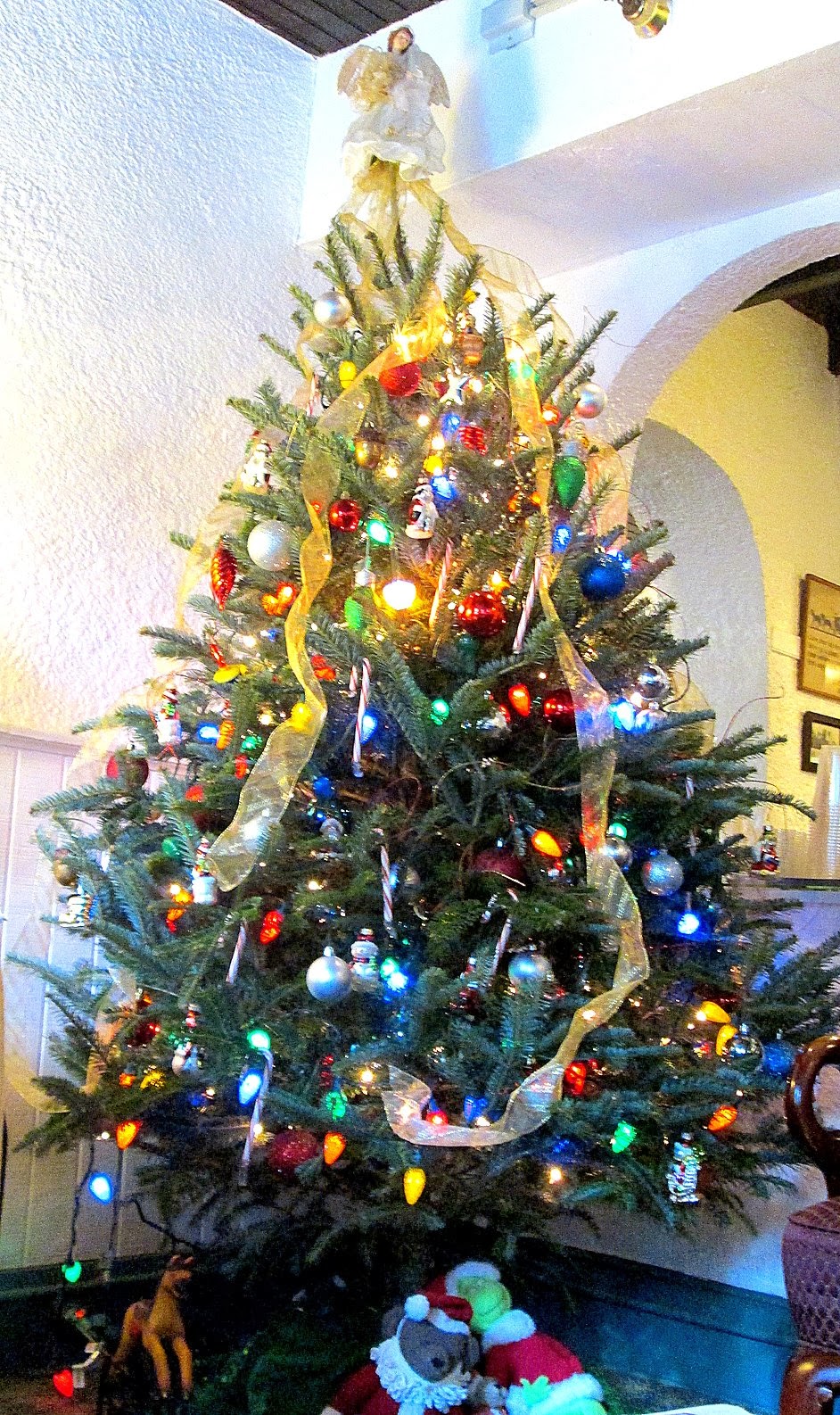 Totally in love with the giant old fashioned tree lights!

Upon arrival, we were given all kinds of info, including a menu of the various food and drink offerings throughout the day. (This should be called a “Bed and EAT ALL THE THINGS!” Because I did. But more about food in a bit!) I loved having a printed listing of the food and times it was served to refer to throughout the day. (You guys know I wasn’t about to miss free food!) After taking care of checking in, the lady from the front desk led us up to the room and gave a quick tour. Since this post is going to be long and photo heavy as it is, I decided to do a separate post about the room I stayed in, and keep this one just about the inn itself, so check out the Garden Hideaway details post if you’re interested! 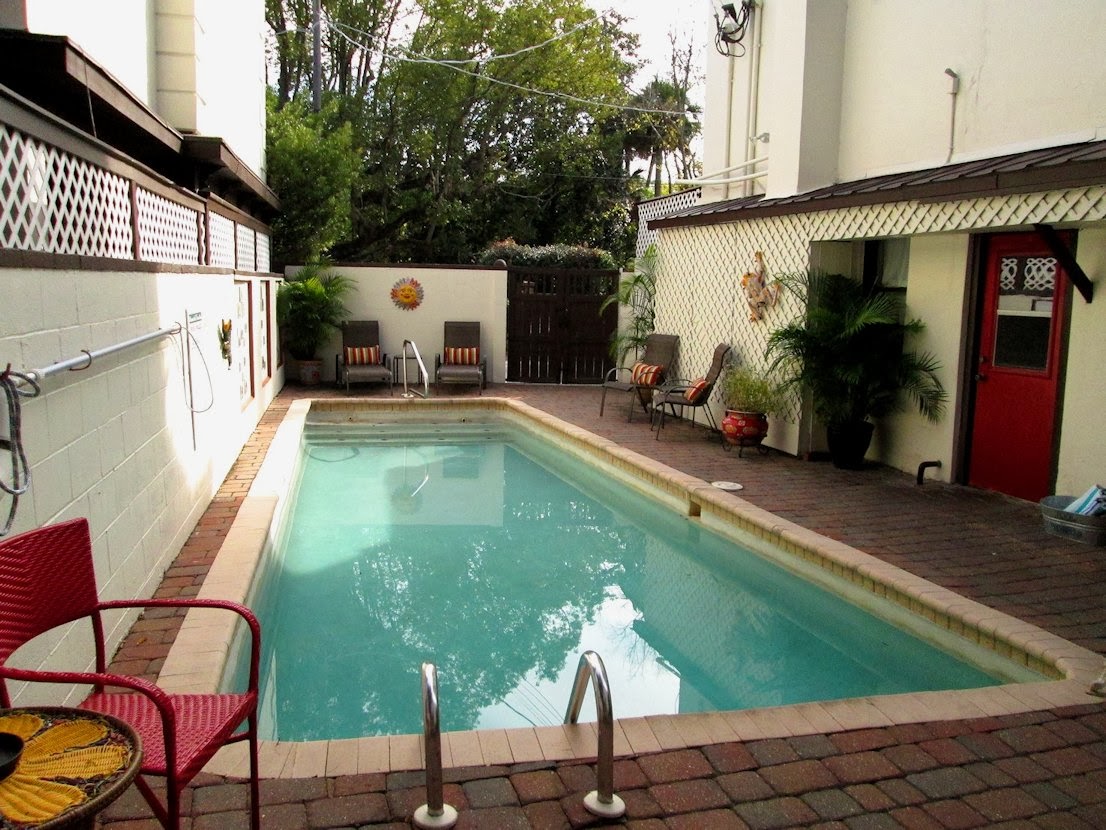 If you just spent all week iced in like I did, this probably looks like heaven about now.

Okay, let’s talk about FOOD! And DRINKS! This place certainly does not let their guests go hungry or thirsty! A few hours after check-in, there’s a “social hour” with free beer and wine. Of course, if you’re like me you can choose to totally avoid the “social” aspect and just hang out with your travel companions (or take your glass of free wine back to your room to enjoy with a book!) They’re totally cool with you taking your food and drinks anywhere within the property, so even if you’re not in the mood for a drink when social hour rolls around (But seriously, who is ever not in the mood for free beer?) you could always just grab one for later. (That’s what I did with dessert, but I’m getting way ahead!) 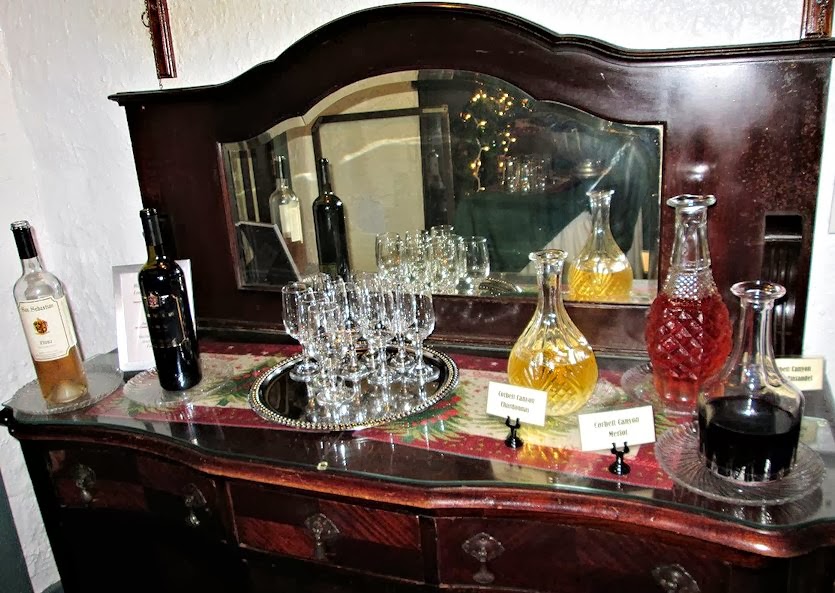 This photo is making me a little nostalgic for vacation. Look at all of that pretty free wine. Looking back, I have ZERO idea why I didn’t try all of them. (Especially since I wasn’t a big fan of the sweet red that I grabbed a glass of.) Note to self: Never pass up the chance for a spontaneous wine tasting! Anyway, the cool thing here was that they featured wines from a local winery (San Sebastian Winery), as well as a few selections from Corbett Canyon. (Since you probably can’t read the little signs, that’s a Merlot, a chardonnay and a white zinfandel.) 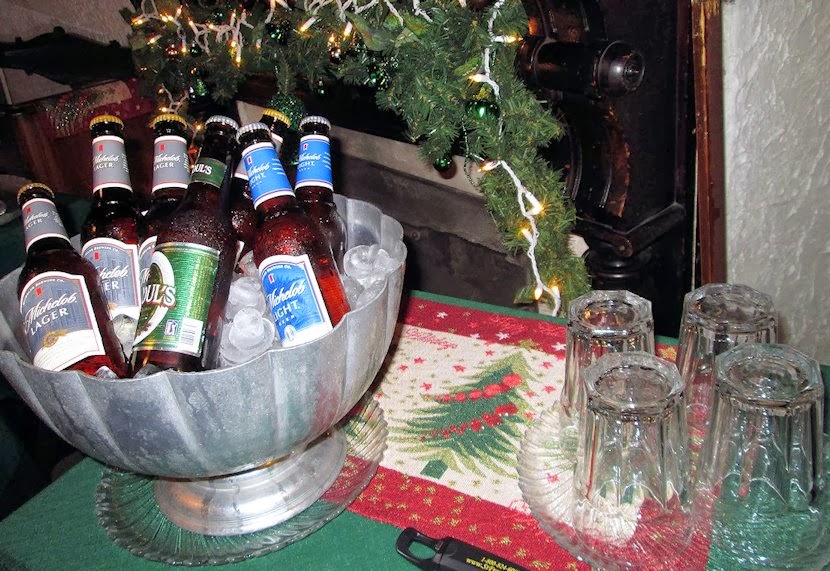 There was also a selection of cold beer for those who prefer it to wine. You can also purchase glasses/bottles/carafes of beer and wine outside of happy hour, as well as mini liquor bottles and mixed drinks. There are also non-alcoholic drinks available, if that’s how you prefer to roll. 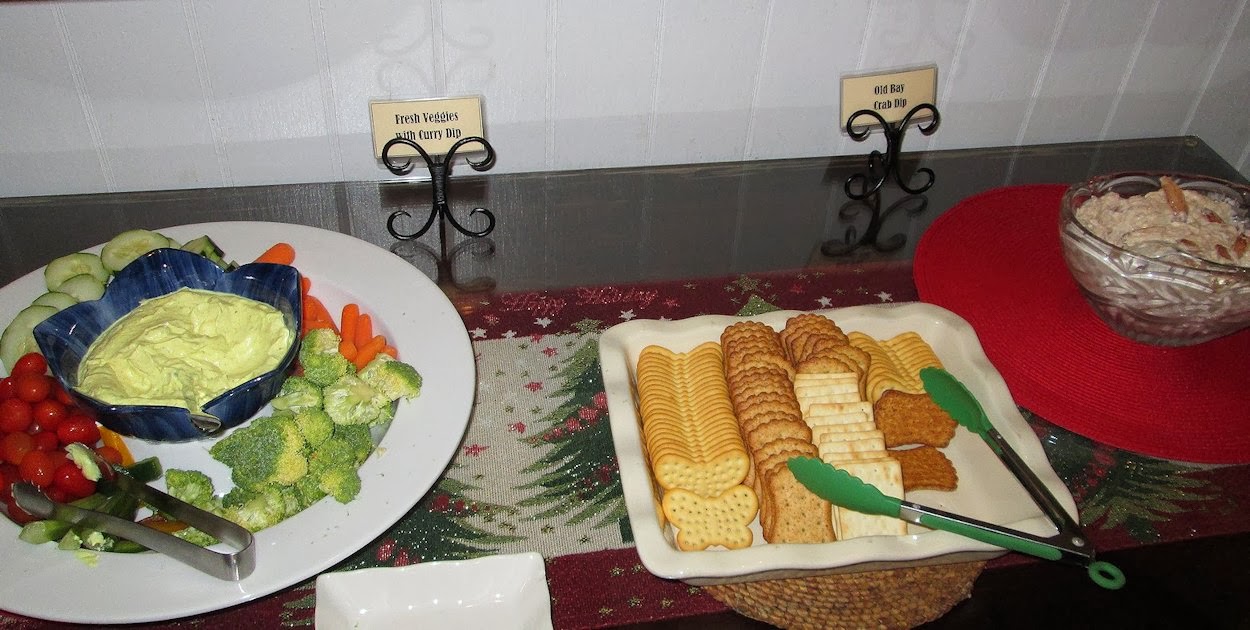 Also: Snacks! Those who know me know that I can totally make a meal out of crackers and dip (or chips and salsa.) At first when I saw the menu that I was given at check-in, I was totally bummed to see that I missed hummus and pita chips night by ONE DAY. (The social hour snacks change daily. Also, I am a hummus addict.) The homemade curry dip totally made up for it, though. I have no idea what’s in it, but it was SO GOOD. Great, now I’m craving curry dip and free wine.

I was a LONG way from the inn when I realized that the time that free desserts are served was coming to a close, so I did some major speed walking to get back on time. Missing dessert time is unacceptable and unthinkable! Thankfully, I made it and grabbed a pecan thingy (that being the technical term) for later, since I’d just eaten dinner and was totally stuffed. 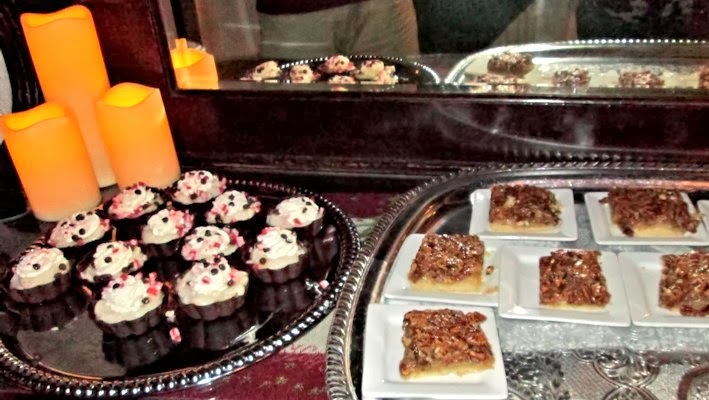 The things on the left were some kind of peppermint chocolate cup thing. I don’t like mint, so I passed. I was a little sad that there wasn’t a non-minty chocolate option, since I was totally craving chocolate (well, I always am…), but the pecan pie bar was really good! (Especially with the sherry upstairs!)

As you can probably guess from the fact that this is a Bed and Breakfast, there was breakfast the next morning! (Shocking plot twist, I know!) There are few things that get me out of bed as effectively as knowing that there is someone waiting to make me a gingerbread latte. Yep, they do seasonal lattes! I believe they were also offering peppermint at the time, but as we already discussed, I don’t do mint. Seriously, though, look at this magnificent creation: 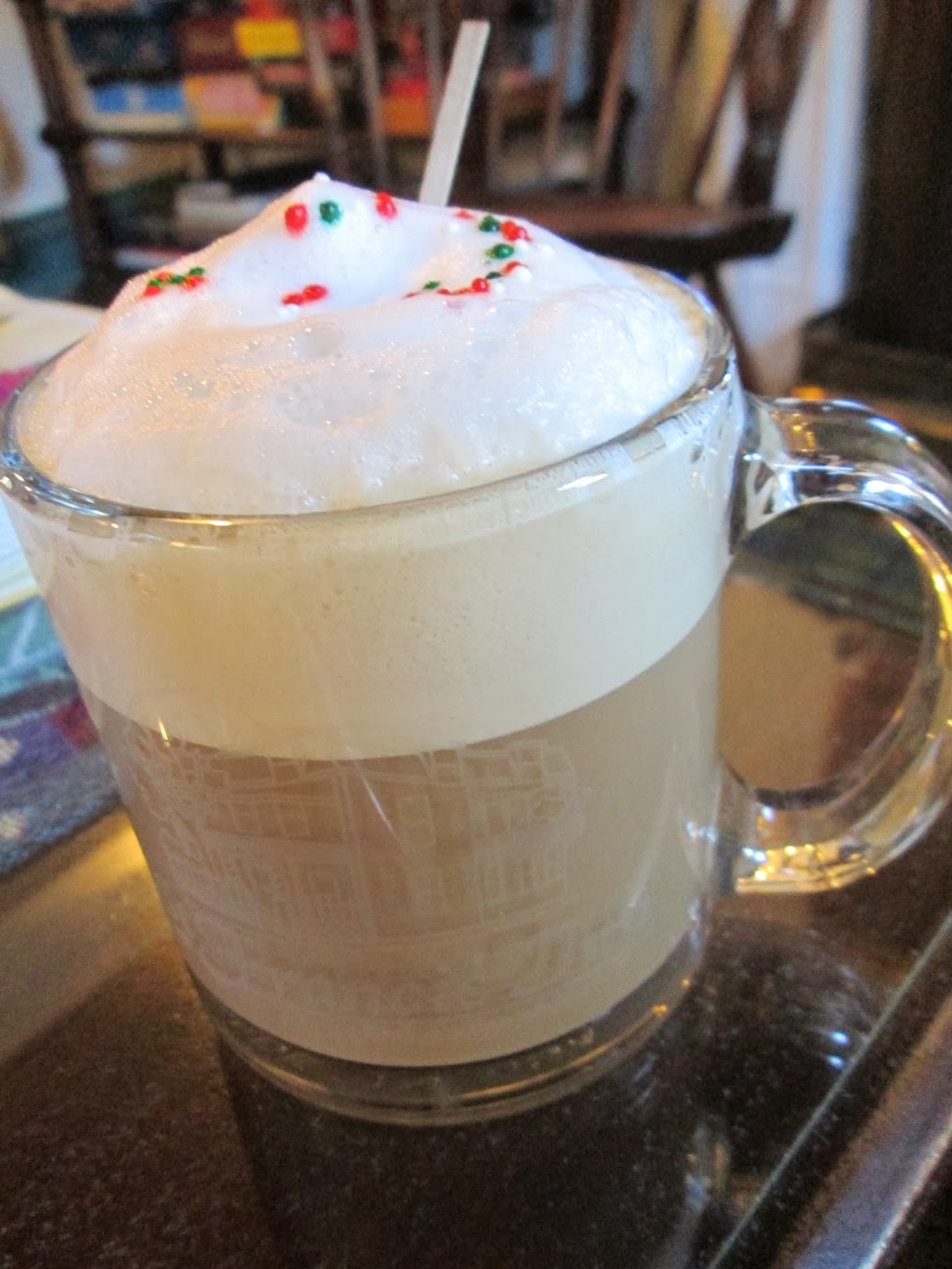 It’s so pretty! I wish there was someone waiting to make me specialty coffee drinks every morning! I’m referring to the little printed menu they gave me as I’m writing this, and I JUST noticed that I also could have asked for an espresso! Do you guys know how blissed out I would have been with a gingerbread latte in one hand and a shot of espresso in the other? Opportunity missed! 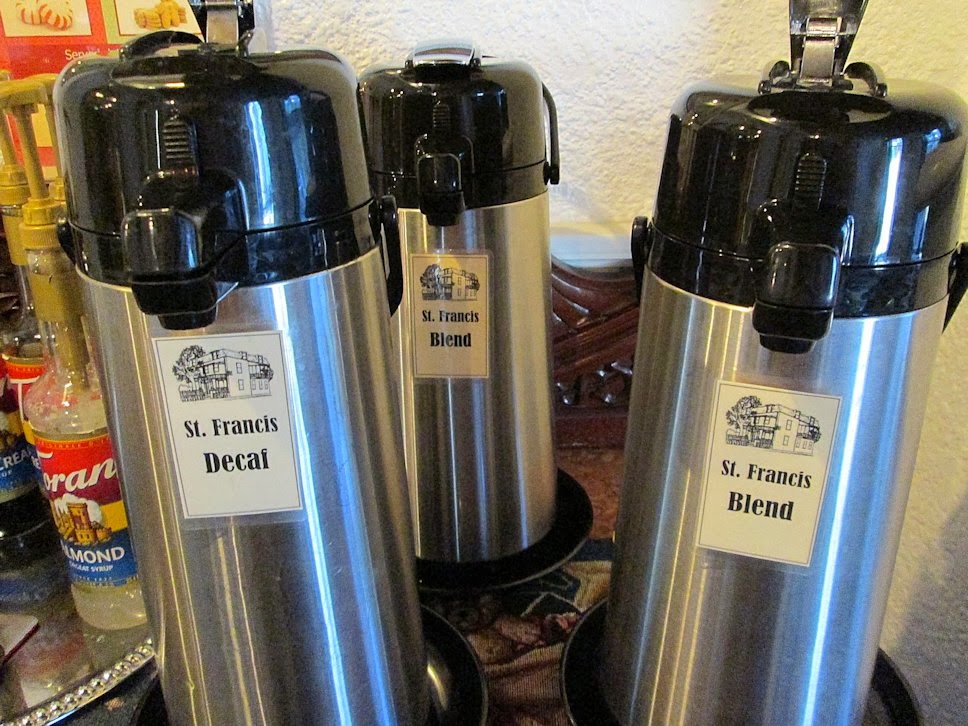 If I recall correctly, they have coffee on hand pretty much all the time. There’s plenty of sweetener and creamer to choose from, as well as a variety of flavored syrups that you can kind of see on the tray to the left. 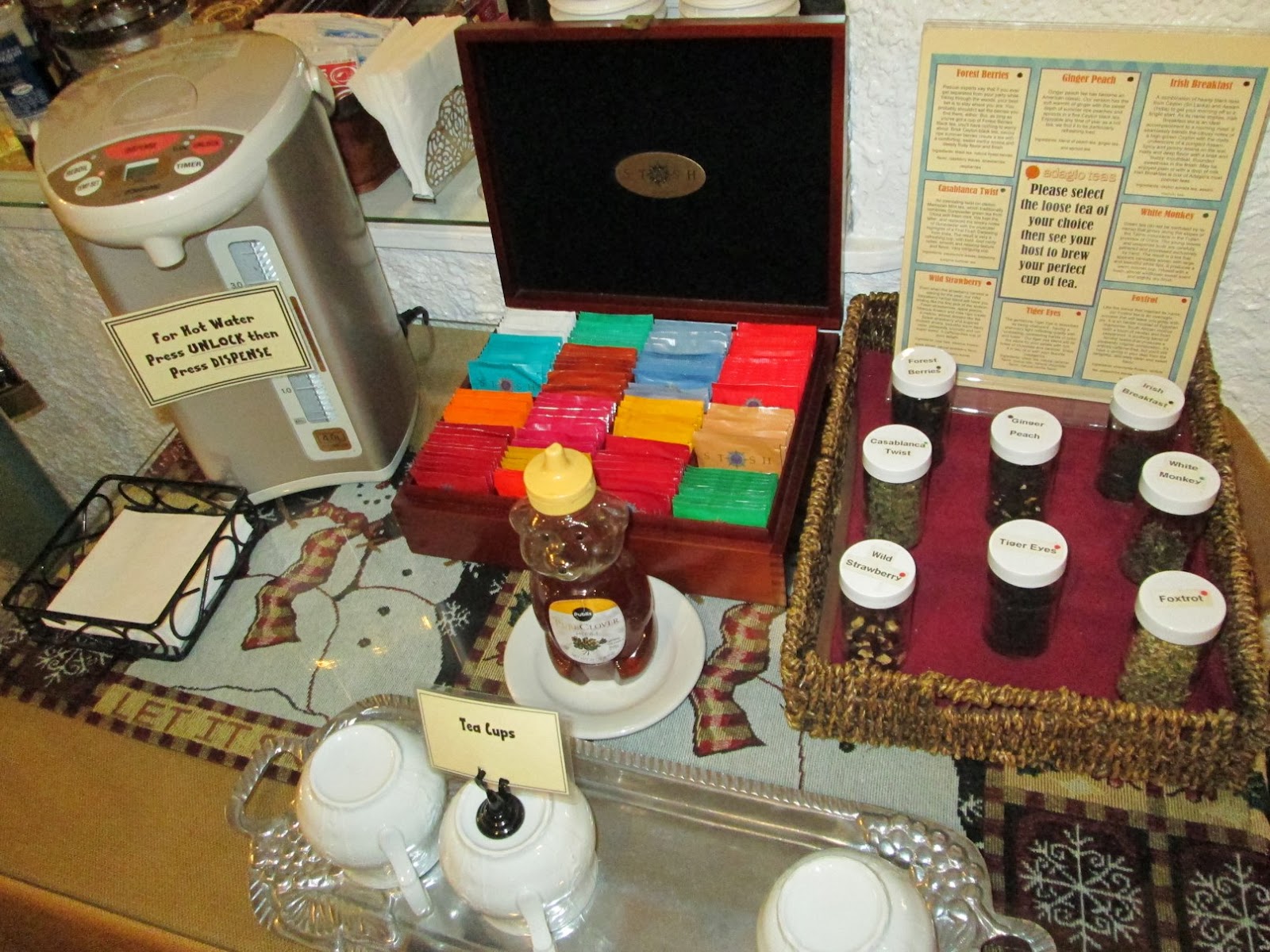 If you’re more of a tea person, they had a selection of both bagged and loose leaf varieties. 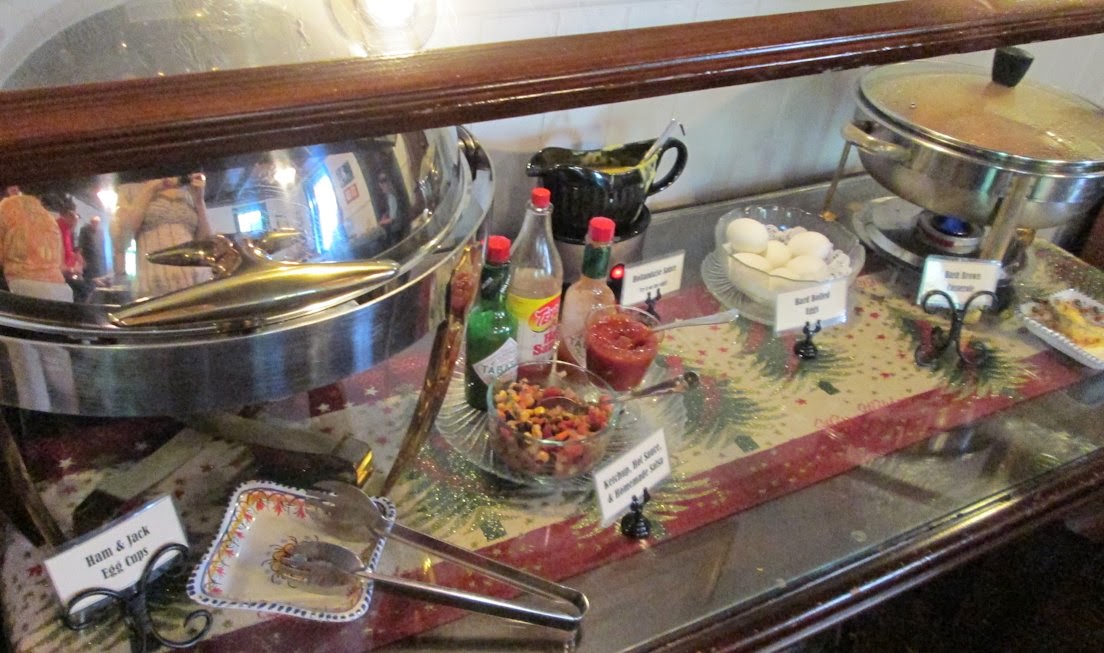 And of course, actual breakfast! Again I was sad to see that I missed the menu offering that sounded the most awesome (strawberry soup) by one day! Most of the offerings involved eggs, which I don’t eat, but there was a cheesy hash brown casserole that was really good!

I also ate an absurd amount of bread with apple butter. (And by “absurd” I mean two pieces. But I never eat in the morning, so it felt like a LOT!) And although it’s not pictured, I seem to recall some kind of fruit salad. Why didn’t I take a photo of my plate? Man, my trip reporting skills have gotten totally rusty!

I totally appreciated that breakfast runs from 7:30-9:30, so you don’t have to get up at some painfully early hour just to get your food! I made it out of bed at 9 in the name of gingerbread latte, but anything earlier would have been rough on vacation!

There are no other “meals” served, but they do have snacks available overnight (packaged pretzels, crackers, chips, etc.) and you can get coffee, tea, and bottled water any time. (I asked the front desk for a bottle of water for the road when we were leaving to drive back to Orlando.)

A couple of last random things to throw in: There are DVD players in the rooms, so you can bring your own favorite movies, or borrow one from the inn’s library. They also had a selection of board games, which made me super happy! (Yep, that’s the FSU version of Monopoly down there. Ah, Florida!) 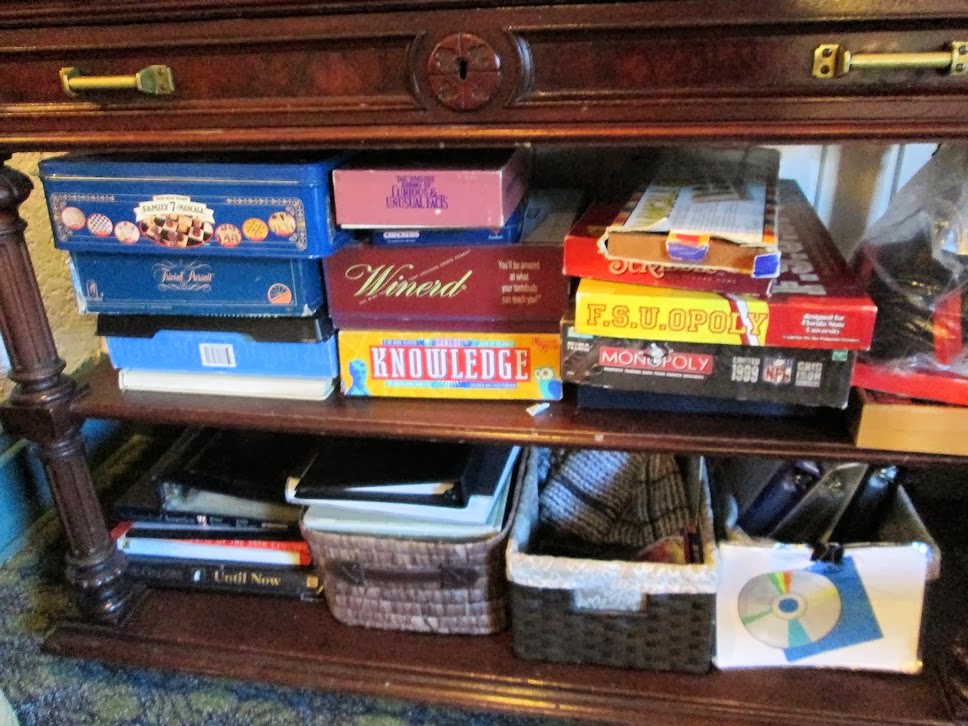 One cool perk of staying at this particular place is that the owners also have a beachfront property a few miles away. Inn guests can use the free parking there, as well as beach towels and chairs. Since my trip got cut so short, I didn’t have much beach time, but I think this is a seriously awesome option to have available.

The inn’s staff was great. Everyone we encountered was friendly and helpful, but we never felt smothered with attention. They seemed to have a fairly large staff for a small place!

And saving the very most important thing for last… ZEKE! The St. Francis has a kitty! I kept an eye out for him every time we were coming or going, but only spotted him once on the first day. I was pretty sad to leave with no quality kitty time, but then guess who I spotted out in the parking lot right when it was time to leave?? 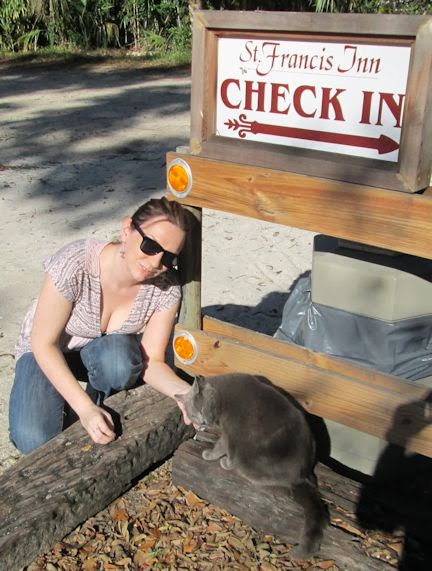 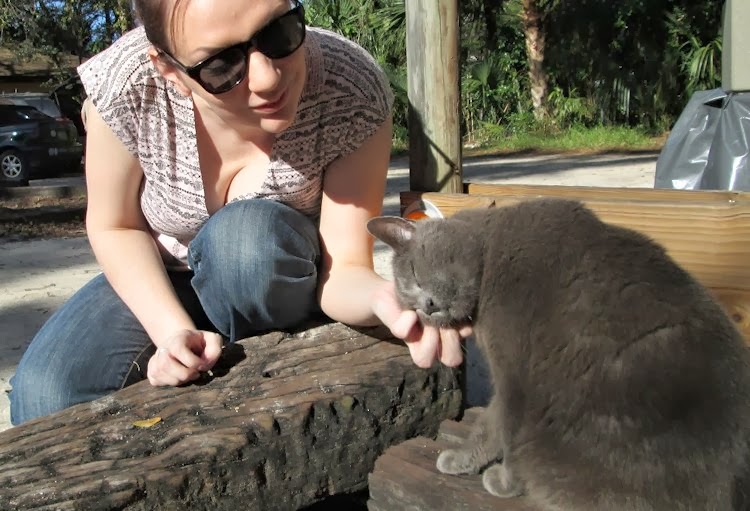 He was a total sweetheart of a cat, and we played a pretty solid game of “I’ll drag this stick that I found back and forth so you can catch it” before I had to hop in the car and leave. (I think he won?)

Since this was super long as-is, I made that a separate post just to show you the gorgeous Garden Hideaway Suite that I stayed in! I’m also planning to write about the fun I had sightseeing around St. Augustine. If you have any questions, feel free to ask!