I just got back from a quick trip down to Key West (more on that soon!), and while I missed the craziest season of holiday travel, I found myself thinking a lot about all of the ways we amuse ourselves while we’re waiting around in airports, trying to survive multiple hours of no WiFi (THE HORROR!) while in flight, or even driving long stretches of unremarkable highway. I’m a podcast addict, so I thought I’d share a few of my current favs in case you need something interesting to listen to on your upcoming adventures!

Rude Tudors is the only British history podcast you need in your life. Literary historian Liz Rodriguez and her hilarious co-host Nicole Keating take on the Renaissance with a unique spin that makes long drives fly by.  Previous episodes have included important topics like old school contraception, historical hairstyles, and of course, cats.

I followed Nicole‘s blog way back in the days of 20SB when it was called More Is Better, and then when it totally changed as her life did and became Life Less Bullshit. She’s now transitioned from blogging to podcasting, and is putting out fascinating episodes Netflix series style (entire season at a time) which is perfect if you want to binge listen on a long road trip. The latest seasons included talks with a burlesque dancer, a dogsled racer, and several professional runners.

I’ve posted about The Babysitters Club Club in my Friday Favorites before, but here it is again! If you happened to be a young girl in the late 80s and early 90s, you’ve almost certainly read the Babysitters Club books. The hosts of this show, Jack Shepherd and Tanner Greenring are NOT young girls, mostly because they are dudes in their 30s. Each week they read and discuss one of the books, complete with charmingly way too in-depth analysis (ahem, Jack), totally off the wall paranormal theories (Tanner), and plenty of fresh perspective on old books.

Buffering the Vampire Slayer is still pretty new (They’re just finishing up Season 1) but a must for Buffy fans. Besides just being a great podcast, hosts Jenny Owen Youngs and Kristin Russo close out each episode with an original song. AND they have a great interview with Armin Shimerman (Principal Snyder from seasons 1-3).

Alexi Wasser used to run the blog I’m Boy Crazy, but now interviews a whole range of interesting guests on her Nerdist network podcast. There’s plenty of discussion about the entertainment industry, love, relationships, and just plain living your life, feeling your feelings. Most of the interviews are close to 2 hours long, so by the end guests are really opening up about the real stuff.

I seriously binged on One Part Podcast during my drive from FL to MO earlier this year, so it’s one of those podcasts where I get all excited about new episodes since I’m totally out of old ones. In addition to weekly longform interviews, Jessica also does a monthly “Things that freaked my week” episode where a guest shares everything they’re digging right now. She has a new cookbook called One Part Plant coming out in 2017!

Let It Out with Katie Dalebout

I received Katie’s book of journaling exercises by the same name a couple of months ago (Yes, I’ll get around to reviewing it soon!) Some of her older episodes aren’t quite my jam, but it’s gotten way better over the years as both Katie’s skills at interviewing and her overall outlook on life have evolved. You’ll want a notebook and pen handy while listening to the recent interview with Josh Radnor (HIMYM) because he drops some seriously brilliant ideas. 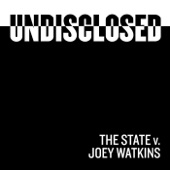 Season 1 of Undisclosed was a follow-up to Season 1 of Serial, bringing together Rabia Chaudrey (Family friend of Adnan Syed who originally brought the story to Sarah Koenig for Serial. I recently reviewed her book, Adnan’s Story), as well as law professor Colin Miller and legal badass Susan Simpson. The second season dives deep into another wrongful conviction that has resulted in an innocent man behind bars for murder since shortly after high school. Great for true crime fans or those who love geeking out about the law. There’s also a weekly addendum episode hosted by Jon Cryer.

Do you have any favorite podcasts that didn’t make my list? Let me know about them down in the comments!