I’ve only been Orlando for a week now, and it’s crazy how much has happened in that short span of time! I have so many posts coming up about my travel adventures, I just need a nice chunk of free tie to actually write them!! Until then, here are a few favorites from the past week or so:

1. The way the community has come together after Saturday night’s tragedy. Lines to donate blood stretched on for blocks, so many fundraisers have been organized, there are vivils being held in pretty much every neighborhood (I’m going to one Sunday night), and even billboards popped up along the interstate literally overnight. What happened is unspeakably horrible, but as Mr Rogers said, “look for the helpers”. I’ve seen so much love and desire to help out in any way possible this week.  That’s love.

2. If you follow my personal Twitter, you know I have a big ol’ nerd crush on MSNBC’s Chris Hayes. (“Big” is definitely an understatement there.) When I found out he was flying down to Orlando on Monday morning to broadcast live from a location close to Pulse that evening, there was no question that I’d be doing whatever I could to at least go say hi. It’s a good thing I’m determined and stubborn as hell, because making it happen was an endeavor. Every single street was blocked off by police cars, and there were media vans everywhere.

I parked at the ginormous Target since it has a parking garage where I was pretty sure my car would be safe and pulled up walking directions on my phone. I was only about 1/2 mile away from where Chris was going to be filming, but even walking wasn’t possible in a lot of areas due to filming in progress. It took about a mile of walking in 90+ degree FL heat and humidity, drawing upon that ever important skill of walking quickly with purpose and looking like you totally know where you’re going and belong there, but I made it. I didn’t have the best view, but I could actually see him every now and then. 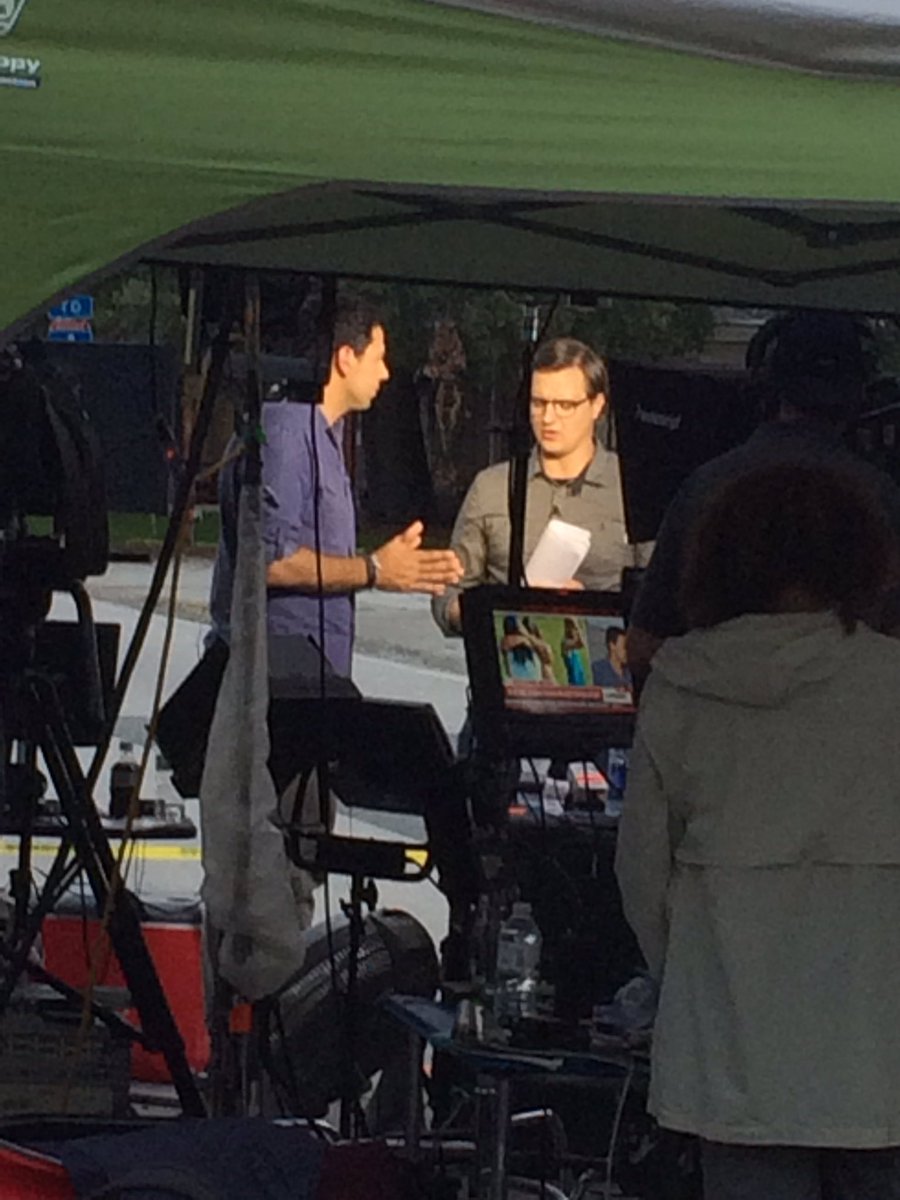 He knew I was there thanks to the wonder and beauty of Twitter, so moments after he finished that night’s show, this happened:

This guy. ???? I think this is his third or fourth time covering unspeakable tragedy in the past year. I don’t know how he does it, not to mention keeping up with the insanity of this election season. Also, he is okay to look at. (I realized that the reason I look so derpy is that I was gazing at the Chris on my phone screen instead of looking at the camera. Good job, me. Way to play it cool.) #inners #orlando #HowDoesHeLookThatDamnGoodInThisHumidity #nerdcrush #news #msnbc @chrislhayes

Yes, I know that photo of me could appear next to the term “derp” in a dictionary, but OMG HE IS SO BEAUTIFUL I COULD NOT EVEN. I would have happily chatted with him for the rest of the night about news and politics and his upcoming 2nd book and how he got his eyes to be so freaking blue, but he had another live show to prepare for in just two hours, so after a few minutes of conversation I had to let him go. (I then proceeded to get totally turned around walking back to Target, because my brain had totally stopped functioning.)

Definitely NOT the circumstances under which I would have chosen to finally meet someone I’ve absolutely adored for almost 2 years, but timing is never perfect, and getting to meet him was such a nice break from the overwhelming sadness of that day.

I don’t even want to add up how much I’ve spent at the best grocery store ever since I’ve been back in Florida. That black bean humus was amazeballs. Also addicted to the brownie pudding their deli makes. (I also got the Orlando City soccer shirt I’m wearing in the pic at the top of this post there for $14!)

4. The creator of Welcome to Night Vale has a new podcast called Alice Isn’t Dead. I listened to the first 6 episodes on my drive to Florida, and it’s so good! And a lot of the storyline takes place on the road, so it’s perfect for a long drive.

5. Florida rainstorms. It rains almost every day here in the summer, which I’d kind of forgotten. It goes from zero to downpour in like a minute, rains like crazy for about ten minutes, and then stops as abruptly as it started. Then you get that glorious post-rain ozone smell, and everything is just kind of… refreshed. Plus, there’s usually seriously badass lightning involved.

Heading to Disney’s Animal Kingdom tomorrow, which I’m pretty excited for since I haven’t been in like 6 years! I miss my gorillas and Festival of the Lion King and everything else!!

Check out some of the other awesome Friday posts in these link-ups!