Before I get into this week’s favorites, I have a question for you guys – What’s your favorite comment system? I currently use CommentLuv but wow am I tired of sifting through 50+ spam comments per day. What do you guys use and like? What should I avoid?

1. I heard about this interesting study on the Brain Candy Podcast (I’m working on a new list of podcast suggestions, btw!) and it’s pretty amusing to look at the results. Basically, they asked a bunch of people to draw the logos for popular brands – Starbucks, Apple, Target… logos you probably see on an almost daily basis. It’s weird how little detail our brains seem to retain about these images that we see over and over and over! You can see the full article (full of amusing drawings) here!

The best part is the series of gifs at the bottom where they put people’s attempts at drawing the logos onto products.

My other favorite part? Whoever drew my favorite attempt at the Sbux logo: 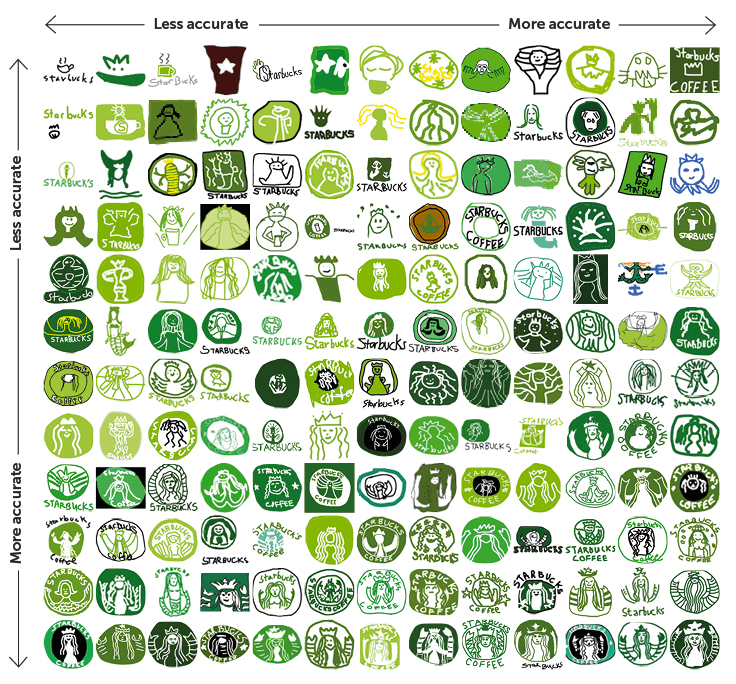 How is that one MORE accurate than the one on the far left that looks like HRC sipping a cup of coffee?

2. It’t time for Target Birds (again!)! (I feel like that needs an official name.) On this week’s pilgrimage to the holy land of Tar-zhay, I had a gift card from Swagbucks so I got to do a bit of a “Treat yo self” trip.

Important life question: How is one supposed to choose between these three??

Also, OMG OMG, I just searched the Googles to find that image and found out there are three MORE that I’ve never seen in the store!!

What other secrets are you hiding from us, Target?? (You can order the trio of zombie birds online.)

Anyway, I noticed that apparently Target is aware of how beloved these guys are, and made some changes from previous seasons! First, they have names now!

The other change is that the new ones have little tags printed with the year on their feet. I’ve been collecting these guys for a few years now, so assuming that Target keeps making them for a while, it will be fun to easily see which year each one came out.

The two on the left are my fall birds from last year, two on the right are this year’s new additions!

3. Had to share because this made me laugh a lot. I often use Emojipedia when I’m posting to social media from my laptop since it lets you copy and paste. I noticed this note…

So obviously I had to scroll down to check it out.  It did not disappoint.

One of these things is not like the others…

4. I’m working on a whole post about it, but I visited my local theme park, Silver Dollar City, to check out their fall festival on Weds. I grew up spending big chunks of my summer there, but haven’t been in ages! I went to see the Saloon Show for the first time ever, and was literally shocked when a song from HAMILTON popped up!! (That Samsung shocked emoji above might actually be appropriate here!)

5. One other amusing story from my day there…. Back when I was 18-21 I worked at the Dixie Stampede in Branson. I wanted to audition for the show because I’ve ridden horses since I was three, but I had ZERO dance experience.

Me, basically. I really miss when Allie Brosh blogged, btw!

I was practicing in a backstage hallway with a couple of friends who were also planning to audition. I don’t think either of them had dance experience, either, but they definitely had more grace than I did. (A few years later in a dance class, the teacher started to ask me “Could you kind of just…” and I completed her sentence “Be awesome?” “Yes, but…” “Not suck?” “Yeah, that’s kinda where I was going.” “Be Awesome, Don’t Suck” became our dance troupes motto.) ANYWAY… after aforementioned friends and I had run through our little routine backstage, one of the trick riders from the show as kind enough to show me how to properly prep for a turn…

Using a Drake gif is actually an understatement here.

Getting a note on how not to suck is a very helpful thing. Getting that note from a hot dude who is a WAY better rider than you and later realizing just HOW dumb you looked doing the thing the wrong way…

The point here? Same dude who kindly showed me how to look less dumb like 15 years ago was now hosting the Wild West Show at the theme park.

I said hi post-show but chose NOT to re-create my former dancing glory. Despite the embarrassment factor back then, what I remember more is the kindness of taking time to help an awkward 19 or 20 year old when he had zero obligation to do so. I will probably *always* be way more graceful on horseback than when flailing my limbs around in an attempt at choreography, but that moment of kindness did make a difference and has clearly stuck with me given that it’s the primary memory that hit me when I saw him 15-ish year later.

As usual, I’m finishing this post while curled up at the library trying to finish writing ALL THE THINGS before the weekend. Also as usual, I’m probably going to work through the weekend, but this time it’s for a better reason than usual! I get to go on a dinner cruise on Monday (yay, blogger perks!) and then make one last (probably) trip down to Eureka Springs mid-week where I’m staying in an ADORABLE historic cottage and checking out the art festival. (And buying a big bottle of that butter-flavored olive oil at Fresh Harvest that somehow tastes JUST LIKE BUTTER despite being vegan. It’s magical. It makes me want to cook. Or just buy really good bread to dip in it. Or maybe just drink it straight from the bottle, although I haven’t quite hit that level of obsession with it yet. Yet.)

Hope your weekend is awesome! Go forth and do amazing things.