One of the places I was most interested in visiting on my trip to Eureka Springs was the Blue Spring Heritage Center. It’s a mix of history and beautiful landscape, and definitely worth the trip! 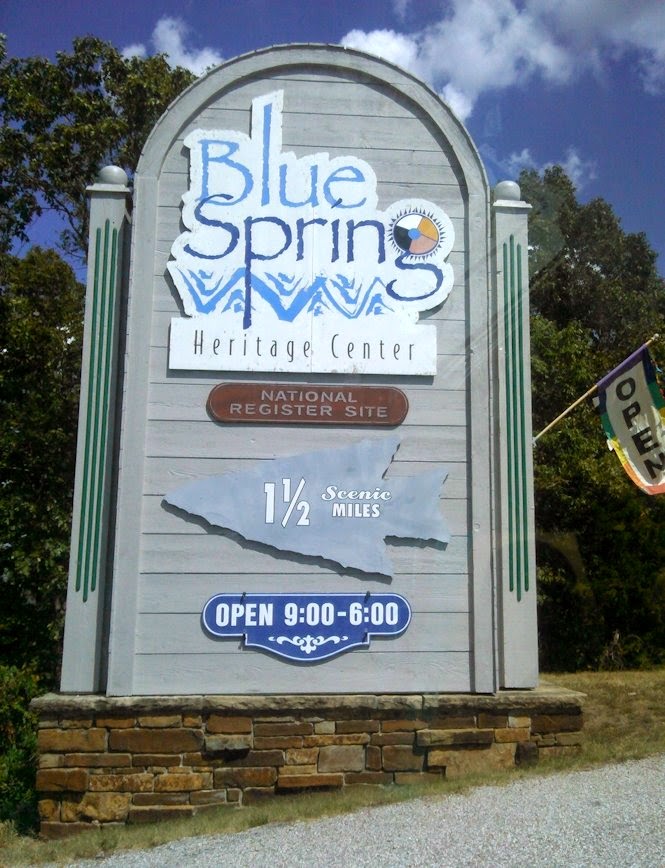 That bit of the sign where it says “1 1/2 Scenic Miles” – they’re not kidding! I kept wanting to snap pics as I was driving but given that the road was quite narrow and twisty, it didn’t seem like a very good idea even though I only saw one or two other cars along the way. The highway leading here (both from Bentonville and from Eureka Springs) is, believe it or not, WAY crazier! You can only go 20-30 mph for several miles because it twists and turns and dips like crazy. 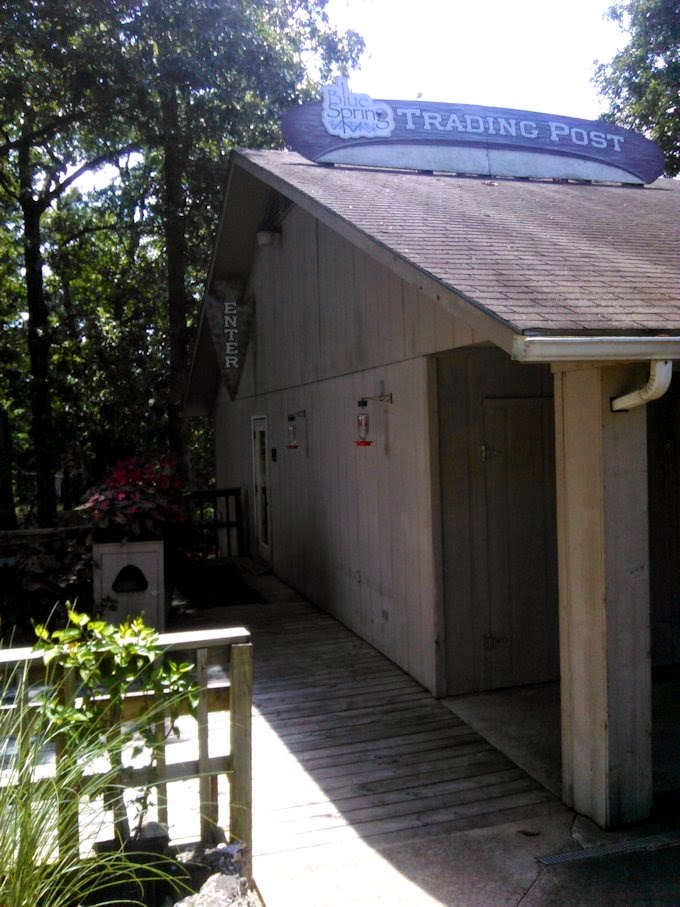 There’s ample parking once you arrive, and I chose a spot that was a bit far from the entrance to take advantage of some shade. (It was HOT on the day I visited!) The only restrooms are next to the parking lot, so be sure to make your stop there before heading in! You enter the Heritage Center through the Trading Post, where you can buy tickets and learn about the best path for touring the sights within. (You’re free to wander around as you wish, but I found that the path they outlined for me was perfect!) They also sell a mix of souvenirs, including a great selection of Native American history books.

The suggested first stop is a small building where you can view a film about a recent dive expedition down into the spring. Given that I’d spent a good bit of the morning sick from getting overheated (more about that in another post!), I happily sat through the whole 20 minute film, enjoying the chance to rest comfortably outside of my car and cool off in the nice, chilly air conditioning. That rest in a cool, dark room was exactly what I needed to feel refreshed enough to go explore, so it worked out perfectly! Small children might not sit through the film, but stopping in to watch for a while will enhance your experience here if you’re someone like me whose enjoyment of a place grows as you learn more about it. 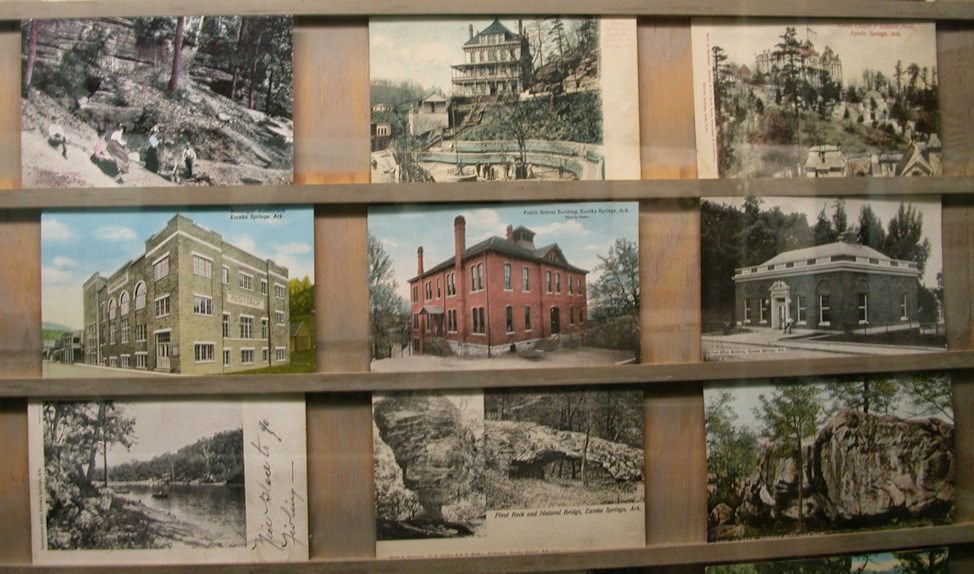 There’s also a cool display of local history as you enter the building that houses the film. Loved these vintage Eureka Springs postcards! 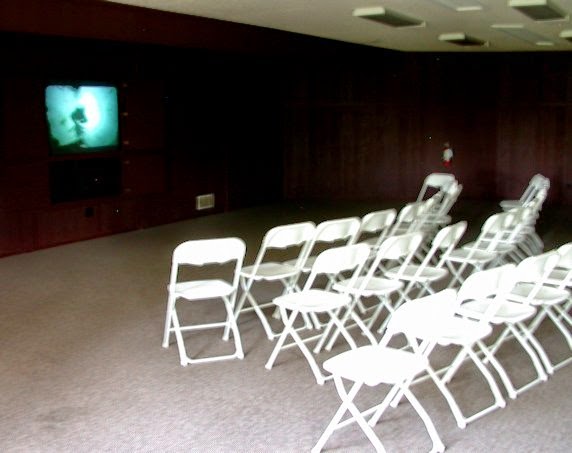 Blurry photo of the film room where I enjoyed the AC for quite a while before setting off to explore.

Here’s the thing: When I was sorting through photos trying to pick which ones to include in this post, I got stuck because they almost all turned out super pretty! This says absolutely nothing about my photography skills and everything about how pretty the waters and gardens were. So without further ado, here are a bunch of pictures of pretty outdoorsy things. (There’s pretty much no editing here, btw – the water really is that color.) 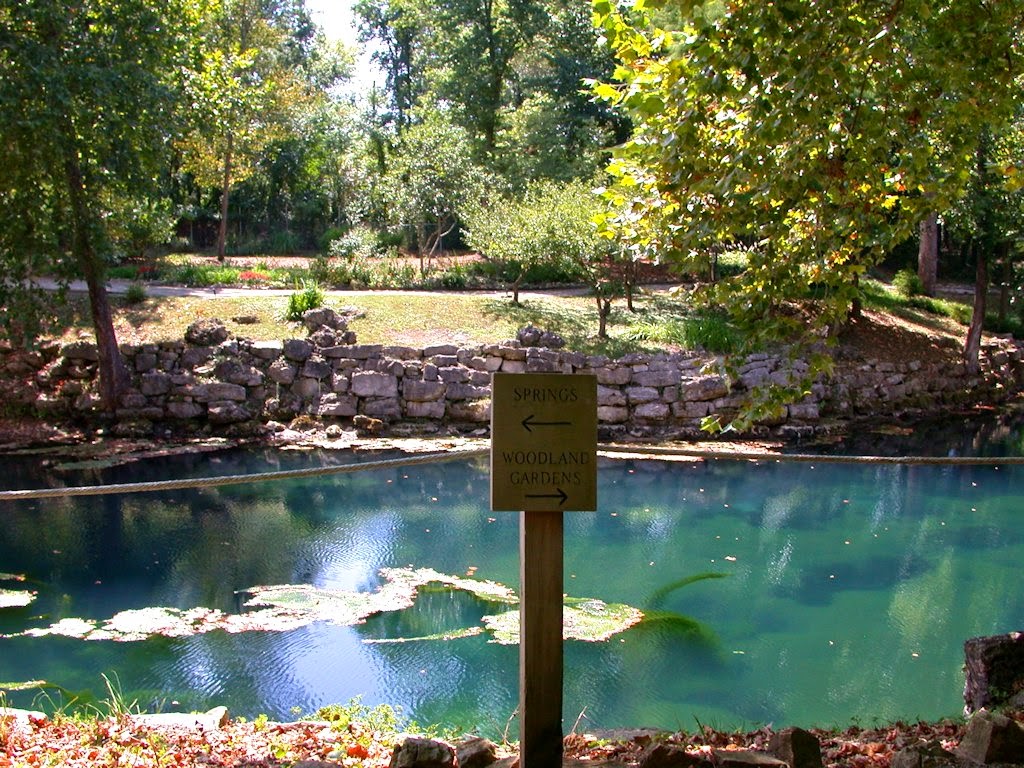 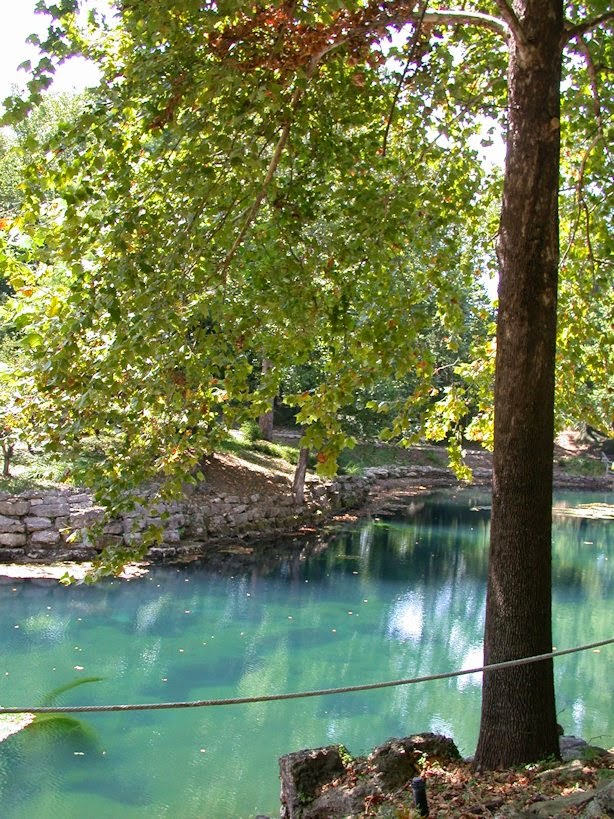 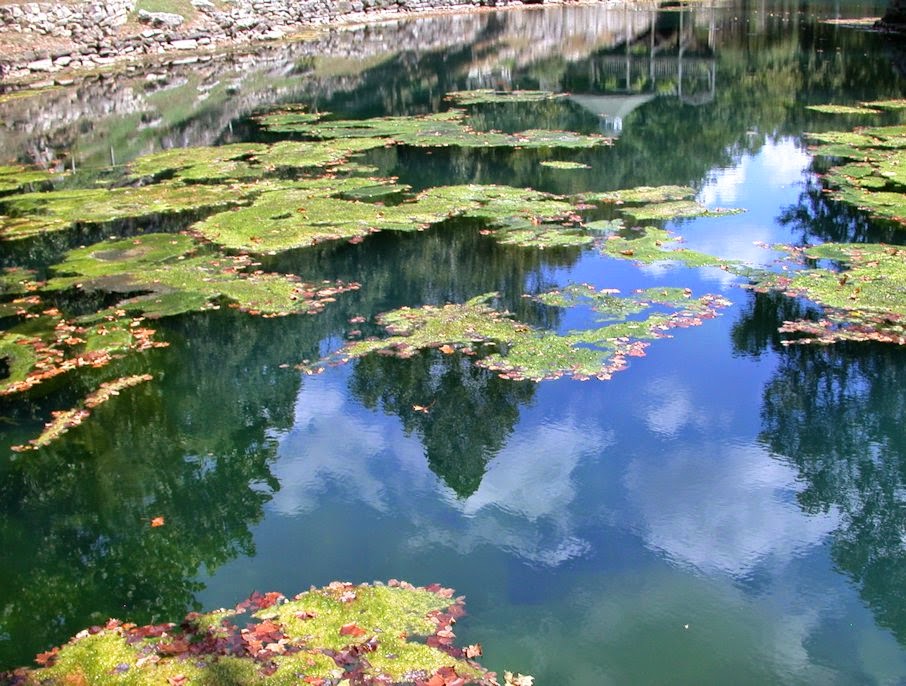 Reminded me a little of a Monet painting 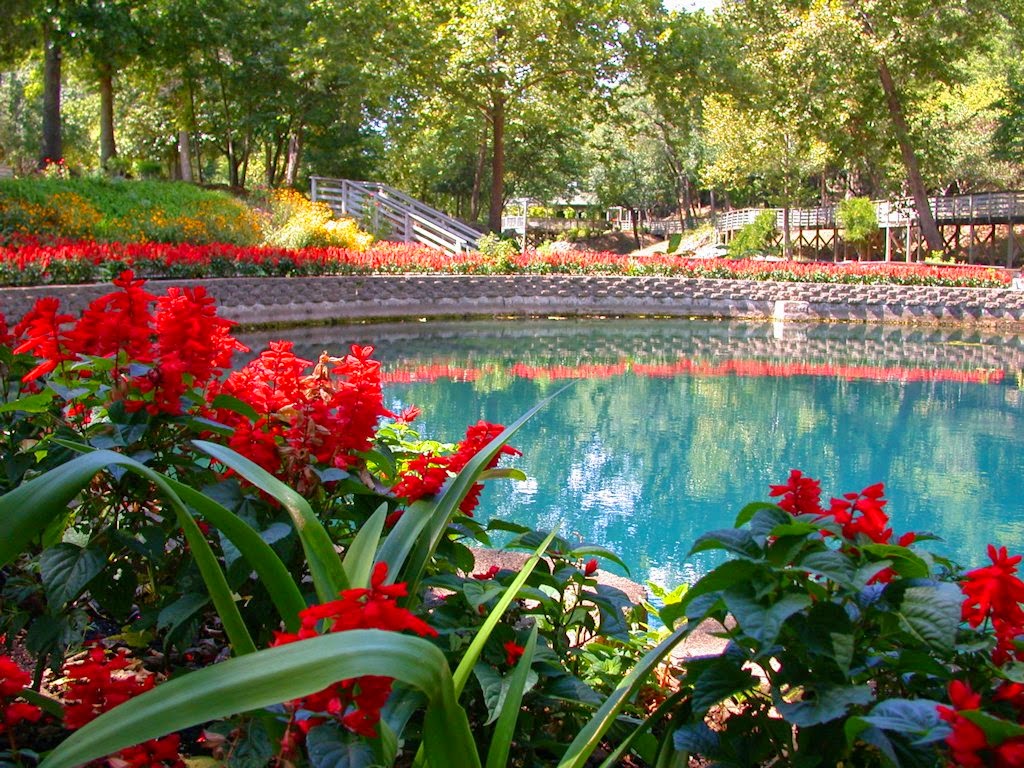 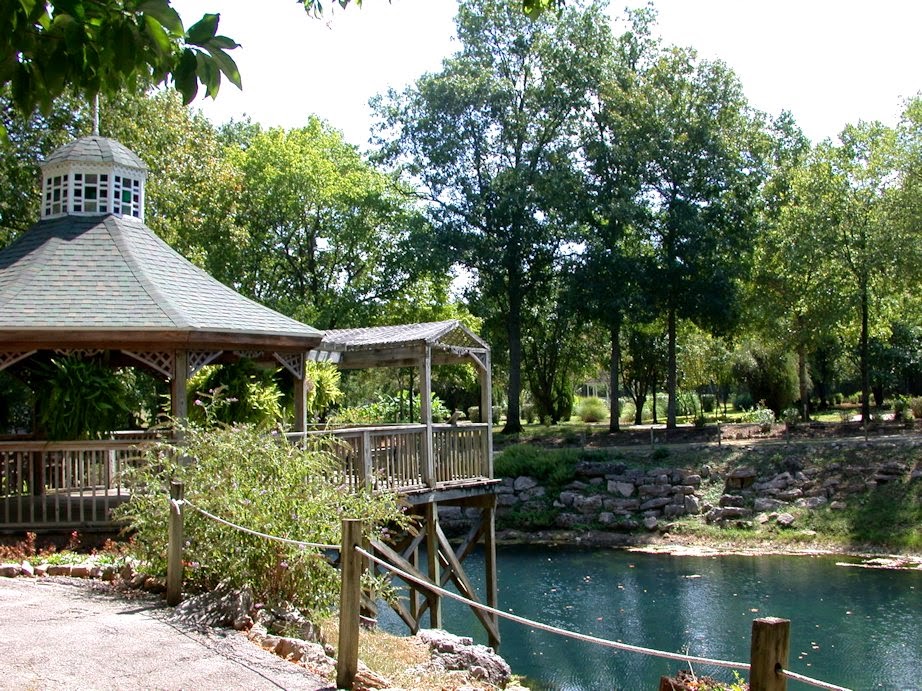 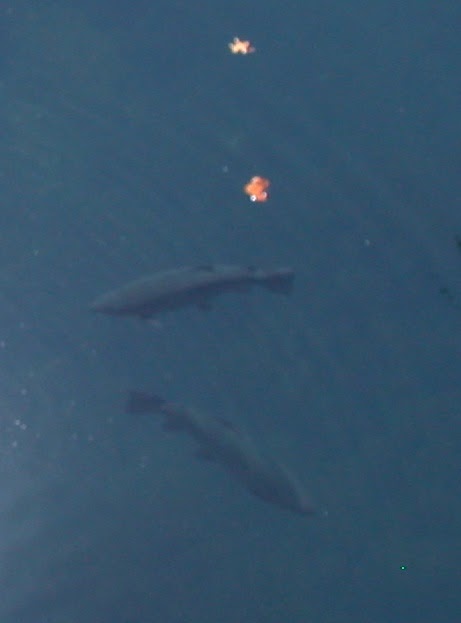 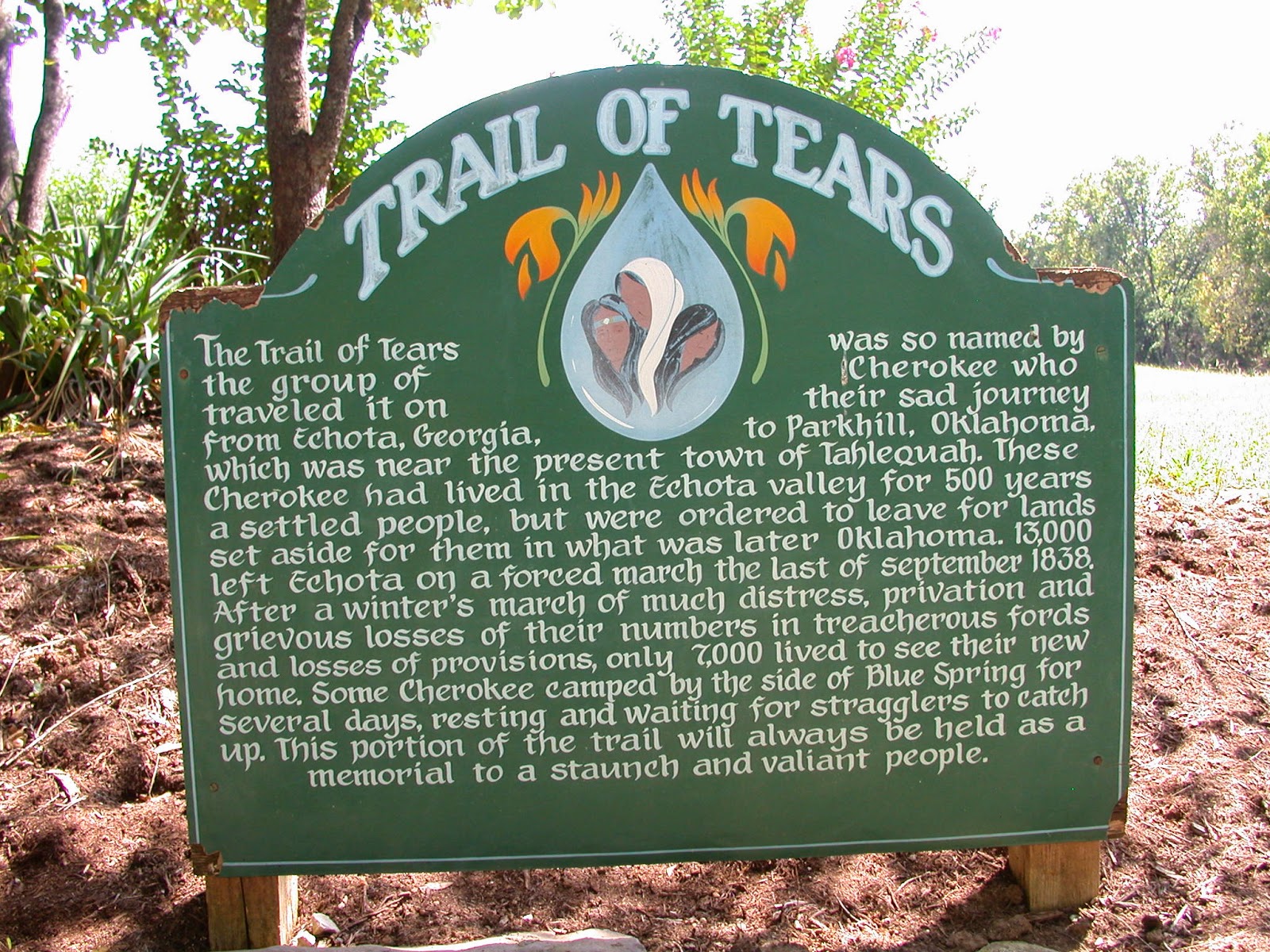 The Native American history of Blue Spring was especially interesting to me since I’m Cherokee. (Somewhere between 1/4 and 1/2, I usually just call it 1/3.) Many other tribes used this area for healing, ceremonies, and as a trading place as far back as 1700 A.D., but the Cherokee spent the most time here as they walked the Trail of Tears. It’s a strange sensation to stand beneath the bluff and imagine the people who used it as a shelter as they rested on such a long, sad journey. 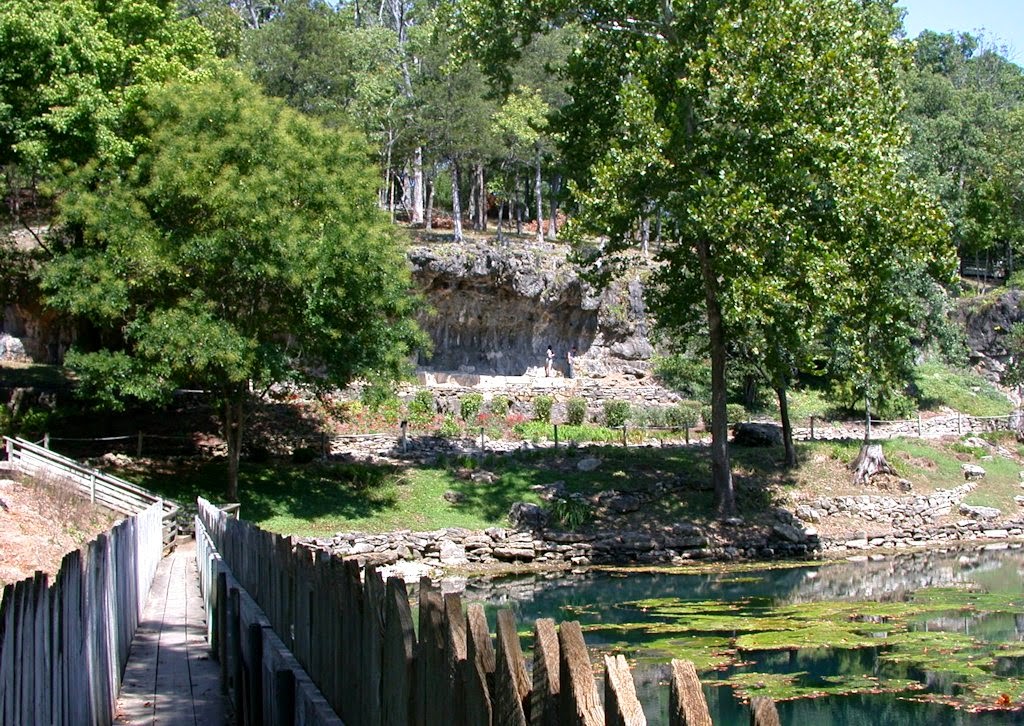 Not a great photo above, but I wanted to include it since the person standing under the bluff gives you some idea of scale. (You might have to look closely!) 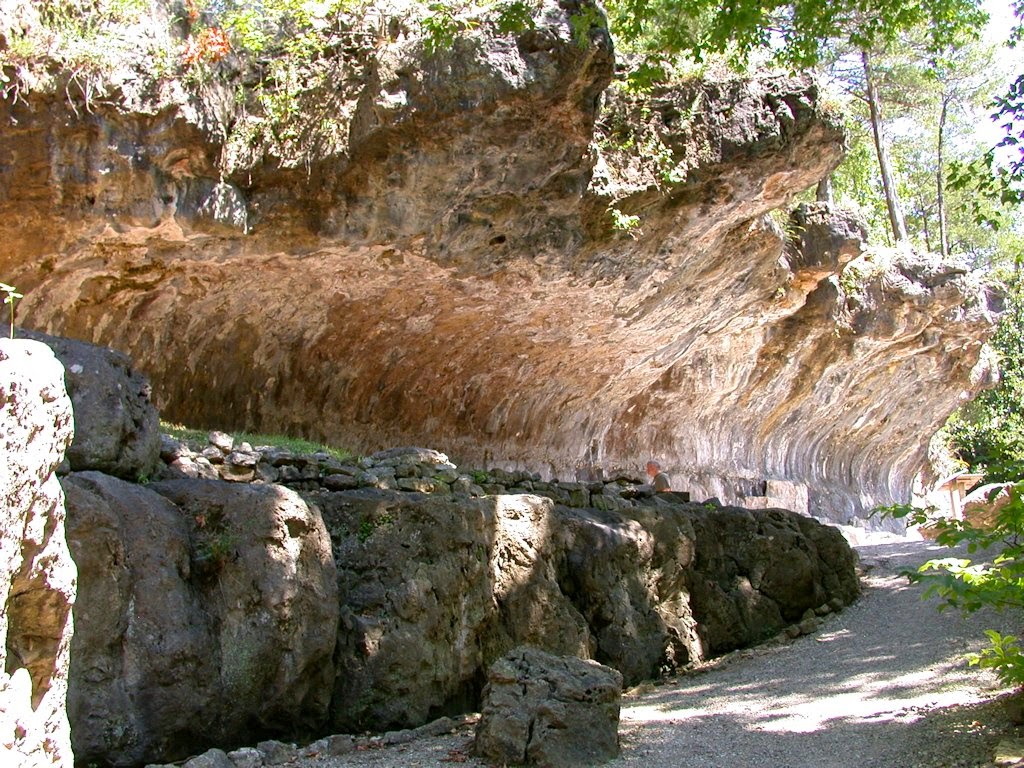 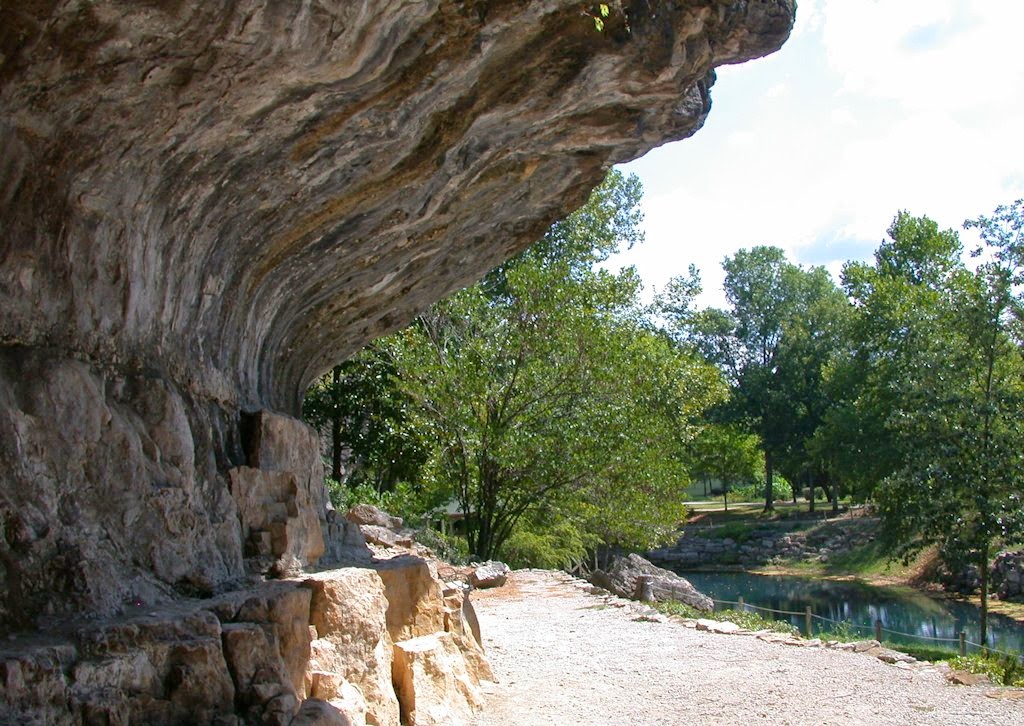 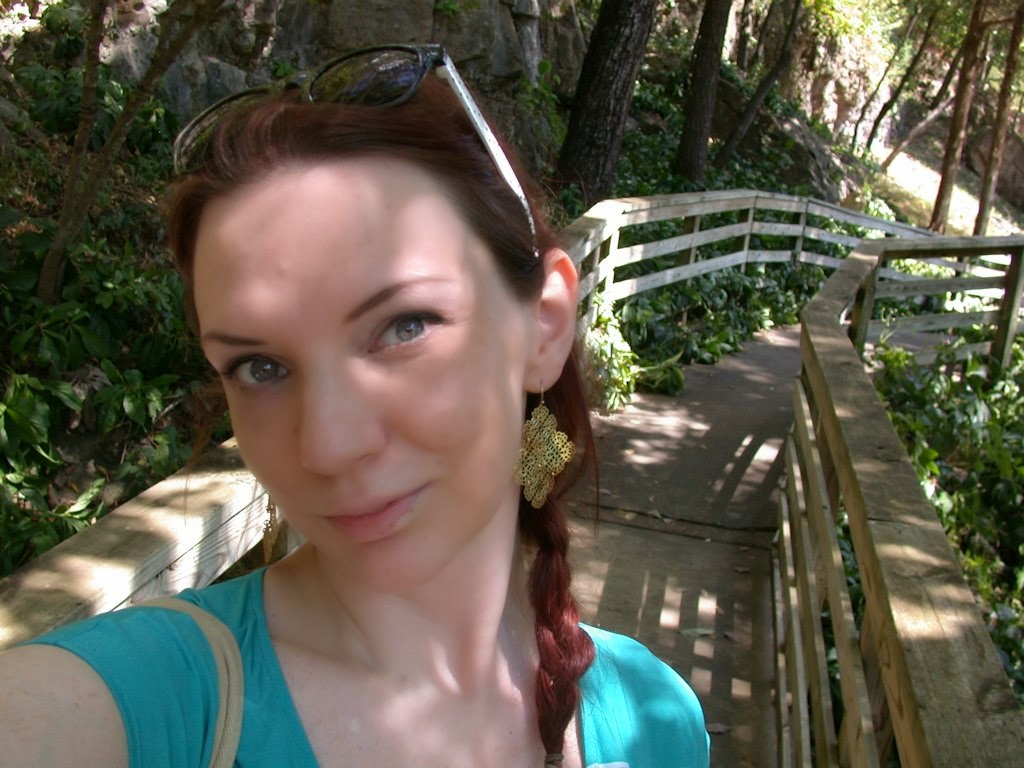 There’s a lot of walking involved here, but it’s a beautiful walk! Although there is a way to get around the park that avoids the use of any stairs, I don’t think I’d classify this place as especially wheelchair or mobility disability friendly. If you do have concerns regarding being able to get around, the staff at the trading post may be able to make suggestions for how to see as much as possible within your limits. (I heard them explain an alternate path to a woman who had her foot in a cast, offering a way to see as much as possible without overdoing it.) 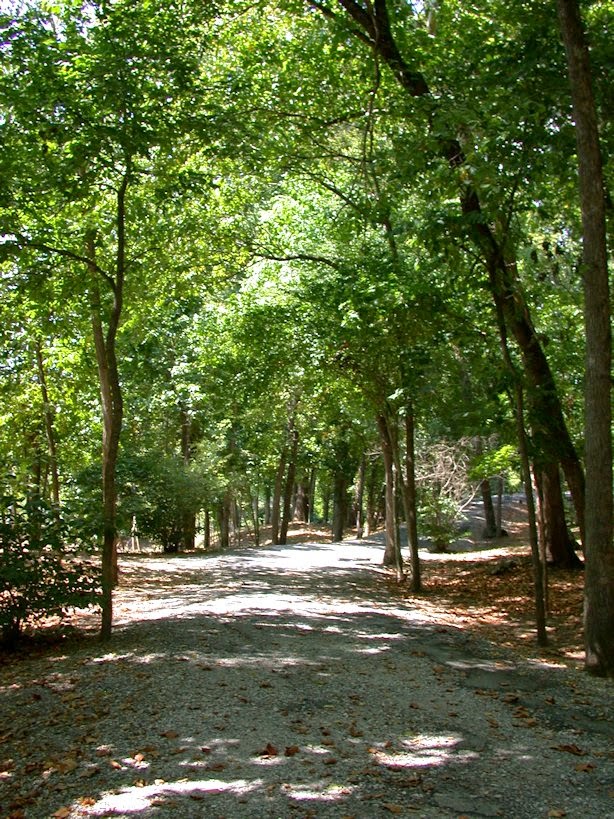 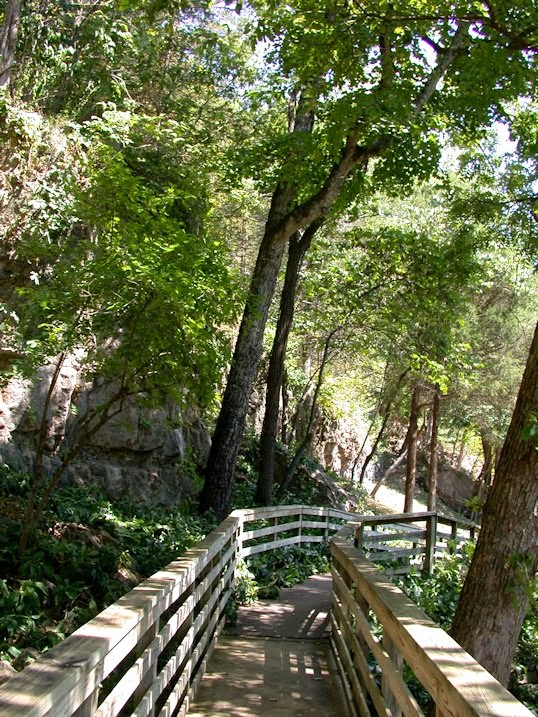 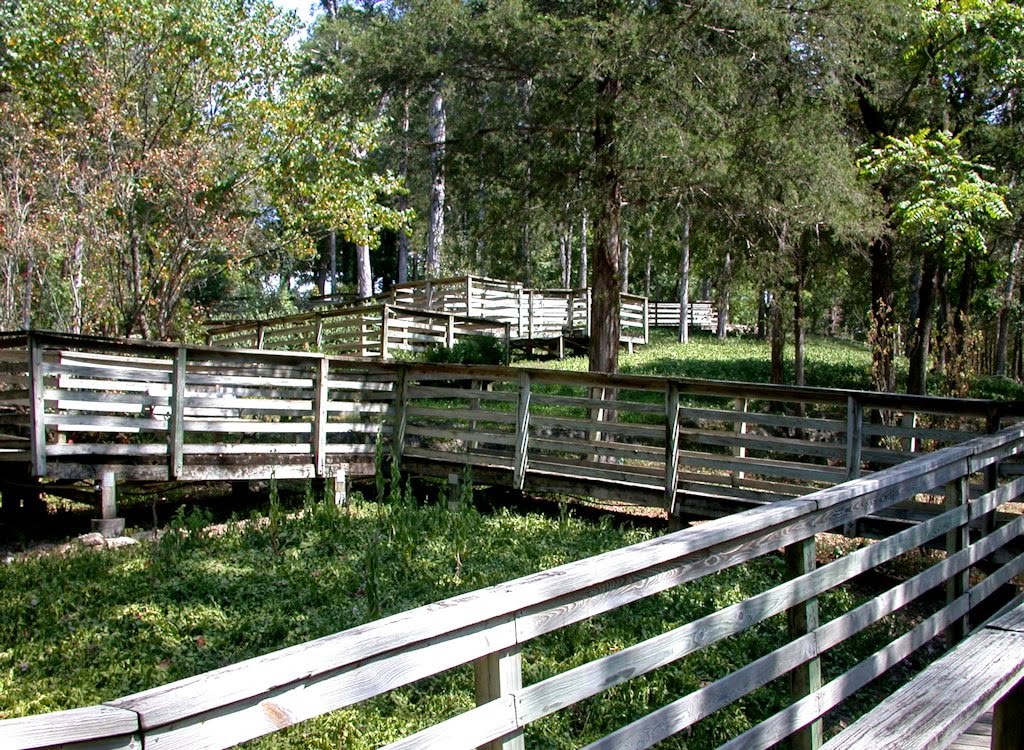 If you’re visiting in the warmer months, definitely bring some water along! Although there are plenty of places to rest as you walk around, few of them are shaded, so given the mid-90s temperature when I visited, I didn’t spend as long exploring as I would have on a cooler day. I actually ended popping back into the room where the film is shown for a few minutes on my way out, just to cool off in the air conditioning! As far as what to wear, I was in a lightweight dress and flip flops and got around just fine, so pretty much any comfortable footwear should do. There is one spot where you can hang your feet down into the cold water of the spring, so shoes that can easily be slipped on/off are a good idea if you want to get your feet wet. (And trust me, with 50-something degree water, I was wishing it was allowed to totally jump in!)

Blue Spring is definitely on my list of places to return to the next time I’m in the Eureka Springs area! Judging by the photos that I saw on TripAdvisor before my trip, I couldn’t quite figure out why everyone raved so much, but it didn’t take long to understand it once I was there. I’d recommend a visit here to anyone who enjoys a beautiful, peaceful walk outdoors, and even more so to those who are also interested in history or archaeology. It was my first stop in Eureka Springs, which worked out perfectly since I was definitely ready for a break from my car after the drive there!

My original post had some great comments, so I took a screenshot of them to post here so they won’t be lost!